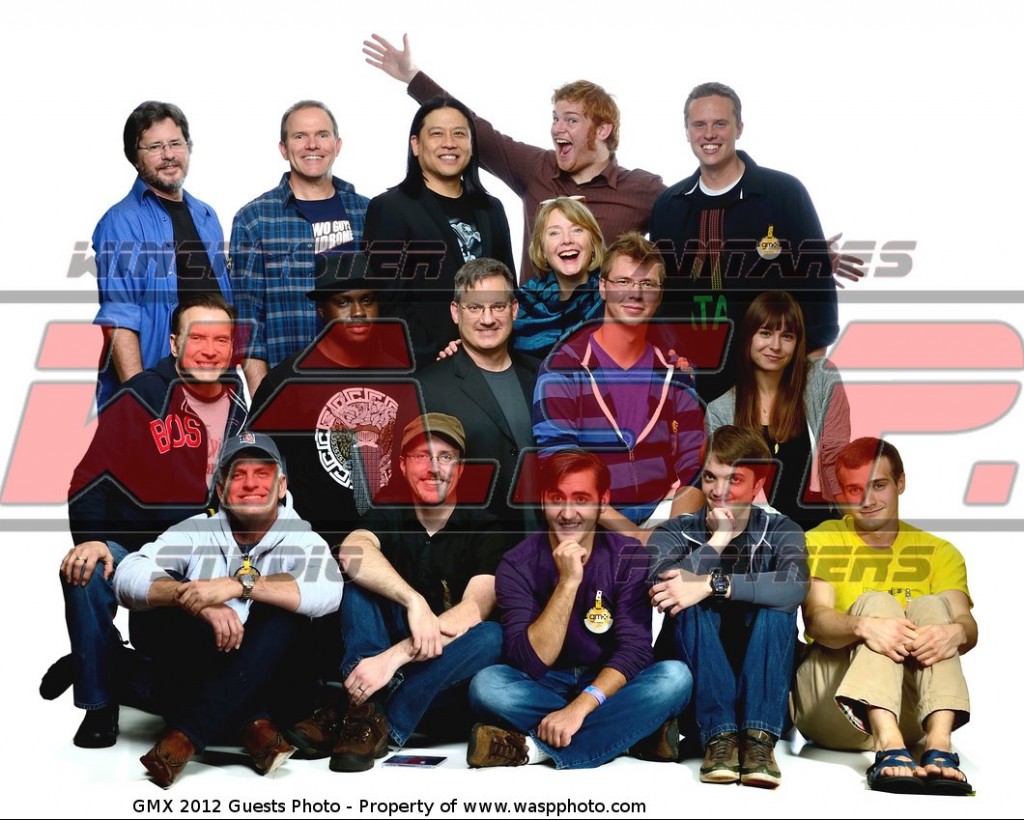 Me and a few friends. I promise you I’m not Shopped into this image. [Photo courtesy of WaspPhoto.com]

Bloody Hell. What a weekend. I’m not entirely sure I’m capable of putting it all into words, but I’ll certainly have a go.

GMX is the first convention I’ve attended in which I have been asked to attend as a featured guest. It’s the first time a con has paid for my flight, put me up in a hotel room, kept be fed and watered, and generally treated me like royalty. It’s the first time I’ve been presented onto a stage in front of an audience and had them applaud, and hoot, and holler. It’s the first time, honestly, that I’ve felt like what I was doing mattered to someone other than myself.

I was ostensibly there to promote PortsCenter, but that was just a fraction of what I did there. On the Friday, immediately after the opening ceremonies, I was rushed into another room where I spent an hour and a half in the company of the delightful Ellen McLain, voice of GLaDOS, for the Portal Party, where she and I spent an hour and a half berating players as they approached an Xbox 360 to play Portal 2 – her in-character as GLaDOS, and me “filling in” as an emergency back-up Wheatley.

I knew this was coming, and I’d spent much of the week trying very hard to sound as much like Stephen Merchant (the voice of Wheatley) as possible. Unfortunately I’m not a voice actor, and I’m not a mimic, but I tried my best to capture the same energy and attitude that Merchant infused Wheatley with. So many people came up to me after the party to tell me how great I was. So many people seemed to think I sounded just like Merchant. That was… wow. I even had people coming up to me to ask if I’d voiced the character in the game itself. Thankfully nobody seemed too crushed when I told them that no, I hadn’t.

But the highlight of that party was getting to sing “Still Alive” and “Want You Gone” on stage with Ellen. Oh boy. I had no idea that was on my bucket list until I was crossing it off. What a night. What an experience. I really hope someone out there got video of that.

Saturday was exhausting, but a very good kind of exhausting. On the strength of my improvisational skills in the Portal Party Ellen and I were invited to join University of Georgia improv troupe Laugh Out Loud for their two shows on Saturday, along with Doug Walker of That Guy With The Glasses fame. Doug and I hit it off almost immediately, and we had an absolute blast participating in the troupe’s Whose Line-esque game session. I spent time on stage being attacked by zombies (and subsequently attacking the audience myself as one), getting counselling from a ninja therapist, licking my own genitals, and being accused of Australianism. Hopefully the Laugh Out Loud team will post video of that too.

The second improv event, which Ellen unfortunately wasn’t able to attend but which Doug was, was more of a Beginner’s Guide to improv. It was a ton of fun teaching the audience about improv, having them come up on stage themselves to join in, and generally just buggering about. The whole experience had me wanting to do even more improv – maybe I can find a group in or around the LA area who’d be willing to take on a 6′ 4″ British redhaired goon.

Saturday evening was the Web Comics 101 Panel. Unfortunately Ethan Nicolle and Brian Patterson were unable to attend due to other commitments (Ethan ended up having to leave the con early on Saturday while Brian had to cancel entirely) , but we still had Scott Christian Sava, Johnathon Brock and Betsy Brock, all of whom offered far better advice and suggestions than I ever could have. I might have accidentally offended Betsy at the top of the panel… I still feel really bad about that. If you’re reading this, I’m sorry!

Saturday night was party night, which meant only one thing: sitting in a darkened room playing Cards Against Humanity with a group of sick-minded problem-causers including, but not limited to, Doug Walker, Brandt “Professor ShyGuy” Cooley, the Marble Hornets, Dennis Upkins, Lorelai Perrin, Ali Spagnola, and too many other wonderful, terrible people to name. Also Leonard.

But before that was dinner, and blimey, that was a treat. Well, sort of – the food was an overpriced Caesar salad that tasted like it had been previously digested by a fish – but it was the company that made dinner so much fun. Spread out across two huge tables were myself, Chris Pope, the Marble Hornets, the Two Guys From Andromeda, Garrett Wang, Rob Paulsen (who I’ll come back to in a couple of paragraphs), Veronica Belmont, Professor ShyGuy… at this point my memory is starting to fail me, because there were so many people there. If I’ve left you out, I apologize.

Sunday really was the Big Day. The PortsCenter Presentation was at noon which, despite a minor technical hiccup where video footage of the Teenage Mutant Ninja Turtles game for the NES didn’t play correctly, was a resounding success. I only wish I’d had the foresight to film the bloody thing.

I then pinballed from there straight to a Doctor Who panel – “One Brit, Many Doctors”, which was originally going to be me and a couple of other Brits talking about Doctor Who but which instead became basically me. I talked about the show for a full hour to a packed room. A packed room, who hung on my every word, who laughed at my jokes and nodded at my thoughts and insights into the show itself.

How, I ask you, is that even a thing? How does that happen? Who am I? I’m nobody. But they loved me there. All weekend, they loved me. People asked me to sign things, they asked me to record messages into their phones, they wanted to talk to me about games, and comics, and TV shows.

Even the other special guests treated me as an equal. Not just people like Doug Walker and the Ellen McLain, but guys like Billy West and Rob Paulsen. I had the very special honor of sitting next to Rob on the flights to and from Nashville, and what a delight he is. Such a nice guy. He was humble and kind, and he treated me like a colleague and a friend for the entire weekend. We had lengthy chats about cartoons, about British comedy, about his career and the work he’s done, and there is not a trace of ego about the guy. He considers himself to be very lucky. I contend that we are the lucky ones.

Billy West was a joy, too. We met at the airport – our flights from LA arrived in Nashville at more or less the same time – and rode in the car to the hotel together along with The Hunger Games actor Dayo Okeniyi. The four of us were chatting away for the entire ride. Again, what absolute gentlemen. So kind, so welcoming, so inclusive.

Just like everyone else at GMX. Just like the staff, who drove us and manned tables, and kept an eye on panels. Just like the attendees, who came out to see a bunch of really awesome people, saw me, and decided I was just as awesome as everyone else there. Just like the people selling their wares in the Dealer’s Room, who were enthusiastic and proud and happy. The whole event felt more personal, more welcoming and friendly than any other con I’ve had the fortune to attend. I didn’t have a single bad encounter, didn’t speak to a single douchebag or arsehole just trying to dick their way around a convention for a weekend. Nobody – not the guests, not the staff, not the organizers and not the attendees – were difficult. Nobody caused problems.

GMX is, without a doubt, the single greatest fan convention I’ve ever attended in the US. It was an honor and a privilege to have been invited to attend, and if I never appear at another con ever again I’ll be happy for having appeared there. I sincerely hope they ask me back for next year. Thank you, Nashville, for having me, and thank you for giving me such an amazing weekend.