BE ADVISED: While the post itself doesn’t contain any spoilers, there are two inline images that contain spoilers for for Game of Thrones season one, and Saturday’s Doctor Who series 7 premiere “Asylum of the Daleks”. You have been warned.

It takes a lot, a lot, to get me watching a new TV show these days. It’s not because I’m a hipster who doesn’t want to watch the same thing everyone else is watching (though I will confess that in my teens I avoided the Harry Potter novels and films specifically because all of my friends were obsessed with the bloody things), but because most current shows have been thoroughly, utterly ruined for me by everybody on the internet everywhere ever before I’ve even had a chance to read a series synopsis.

Everybody is talking about Breaking Bad at the moment. Everybody. It’s the show’s final season – or, as is my understanding, the first half of its final season, the rest of which will be shown in the new year – and the internet is ablaze. People are nattering about it on Twitter, Tumblr, Facebook, and all those other social networks I’m not hip enough to know about yet. Also Google+. Tumblr in particular is rather boisterous, with people posting quotes, clips of the show in subtitled GIF format, and reams of fanart based on episodes that aired less than 24 hours prior. 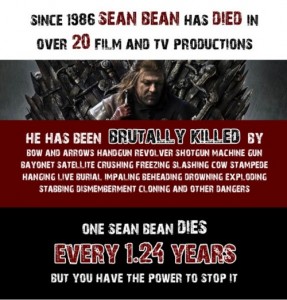 Now you know how Game of Thrones season one ends. Thanks, internet.

Breaking Bad isn’t the only show that suffers this problem, either. The pilot for CBS’ Elementary, their attempt to modernize Sherlock Holmes following the BBC’s rather successful go of it, recently leaked, and within minutes people on Tumblr were posting quotes, breakdowns and, of course, GIFs. Doctor Who‘s seventh series also started this Saturday in the UK, and Tumblr had already thoroughly ruined the show long before the east coast premiere rolled along later that night.

When Game of Thrones is running on HBO, damn near everybody on the internet knows what happened in the latest episode whether they’re watching it or not. When a new episode of Community airs, Tumblr almost immediately becomes a Dan Harmon fansite, and remains that way for the following 48 hours.

Tumblr cannot help but build its nest out of screengrabs, spoilers and snippets like a demented pop culture magpie. Amidst it all, the by now familiar cries of “ALL THE FEELS”, “DEAD” and “ASDFJGFGJKSDJK”, punctuated by reaction GIFs that inexplicably also spoil other shows and films you haven’t managed to get around to seeing yet.

For someone who spends a lot of time on Tumblr, this represents an enormous problem – seeing a TV show you want to watch becomes not just entertainment but a social obligation; something you have to do to avoid being behind the curve. This means torrenting the show before it comes up on Hulu the next day (or, in the case of Doctor Who, after it airs on the BBC but before its North American premiere on BBC America or SPACE), or, if you’re one of those people who still inexplicably has cable, actually sitting down to watch the show as it goes out live.

Imagine that for a moment – having to actually schedule your life around a television show. What is this, the Dark Ages?

A lovely piece of Doctor Who fanart that, if you haven’t seen “Asylum of the Daleks” yet, has the potential to utterly ruin the climax of the episode for you. [Source: Wil Wheaton, via Tumblr]

DVRs and digital distribution are a Godsend – they allow us to digest content at our leisure.  We are in a golden age of television not just because of shows like Louie, Breaking Bad and Doctor Who, but because we are no longer shackled to the television, forced to watch something as it goes out. We can record it or, better still, log on to Hulu or the iPlayer, to watch when convenient for us.

But to anybody who is active on a social network like Tumblr, that freedom is countered by the desire not to have your favourite show utterly and irrevokably ruined by some well-meaning fan who absolutely has to draw a picture of that new character in the latest episode right fucking now, utterly ruining the plot twist for the episode in the process.

Even webseries like The Lizzie Bennet Diaries are chewed up and spat out by social network users – why sit down to watch the show when it’s already splattered all over my dashboard in GIF form?

There are, of course, ways of avoiding this flurry of spoilers. You could install Tumblr Savior, a plugin that allows you to block posts including certain words or hashtags (such as, for instance, #doctor who or #breaking bad). It’s not an ideal solution, however – for a start, it’s predicated on the person posting about the show actually tagging the post, or even including the words you’re blocking. Not ideal if that person you’re following for their exceptional fanart doesn’t tag any of their posts or even post text in their image posts.

I could avoid Tumblr and Twitter entirely, but that feels like not going to a bar simply because you don’t like the house ale, or deciding not to visit an art gallery because you know they’re currently running an exhibit of paintings by an artist you don’t like. It’s like throwing your iPod out the window because you might hear an Alanis Morissette song, and you’re just not in the mood to listen to “Head Over Feet” right now.

While these two solutions might keep me safe from the shows I’m actively watching, like Community and Doctor Who, it doesn’t save the shows I haven’t started watching yet, like Game of Thrones and Breaking Bad. I’ve seen neither show yet, not even so much as a pilot, because while Tumblr has convinced me that I absolutely have to see them, it’s also ruined every single fucking plot point in every episode that’s broadcast. There’s no point in ordering any box sets, no real sense in adding a show to my Netflix queue, when I already know what’s going to happen. These shows have, in a very real sense, been spoiled.

So my answer, when people nag me about why I haven’t started watching obviously brilliant TV shows yet, is that I simply can’t anymore. I crave new experiences, new stories and new media, but social networking is actively preventing me from receiving those things. Short of stepping away from these platforms and declaring myself a digital hermit, I don’t really know what else to do.

Y’know, other than just watching the shows to watch them. Which is obviously madness.