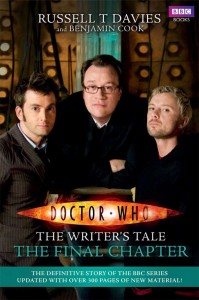 Once a year, every year, I re-read The Writer’s Tale. According to Russell T Davies’ foreword to the book, Steven Moffat said of this book, “If you still want to be a writer after reading this, you probably will be.” I always, without fail, finish my re-read creatively charged and itching, itching to write. No, not even when I’ve finished reading it. Before that. Long before that. Less than 100 pages into the book, and I’m yearning to be at my computer, tap-tap-tapping out a script, or a short story, or some other manner of thing.

The Writer’s Tale is responsible for a good chunk of writing. It’s responsible for dozens of Ficlys, for huge swathes of Jump Leads story. The last time I re-read the book I knocked out two Jump Leads scripts that, owing to current artist-related circumstances (JjAR had to step away from the comic due to freelance commitments, leaving stand-in artist Mr Phillby to finish what will in all likelihood be the last Jump Leads comic story ever), will probably never be seen.

This year, re-reading that book for, what, the fourth time?, I find myself wanting to return to those characters, to revisit them and give them new adventures. But I can’t. The comic is done. Jump Leads is no more.

See, last year I wrote an audiplay adaptation of the first Jump Leads story, “Training Day”, with a few to recording it and using it as a jumping-off point for a series of brand spanking new audio-exclusive Jump Leads adventures. I talked to Dino about recording it, I spoke to Adam about playing Llewellyn. I spoke to rather a lot of very excited people about the prospect of giving Jump Leads a soft reboot and continuing the adventures as monthly audioplays… or maybe weekly serialized ones, like old-school Doctor Who.

But those plans fell by the wayside. Whatever happened to them? It wasn’t so long ago – January, as I recall – that I was frantically emailing people about making those audio adventures. What happened in January that–

Oh yes. I got a job. I got a job working for a wonderful company – Quantum Mechanix – working with people I loved spending time with, and serving as a cog in a machine that made the shiniest, most wonderful geek candy.

Except this month – July, nearly three weeks ago now – I left QMx. Not by choice, mind, but a necessary decision. Since then I’ve been remarkably busy, launching and continually writing Deadlong, relaunching the PortsCenter Kickstarter (it’s at 22% right now, if you can believe it!), preparing for my appearance at GMX in Tennessee, and working on another incredibly secret but tremendously awesome project I can’t really talk about yet… and that’s all before the other two webseries I’d like to develop if PortsCenter gets funded.

But there are still a few hours left in the day, and I really want to write for these characters again. Surely I can squeeze another project into my schedule. I can feel Jump Leads stories pressing at the temples of my head – stories I wanted to write, but didn’t, or couldn’t. Don’t they deserve a second chance? Don’t I owe it to myself to write them?

Or am I just being self-indulgent? Should I take that creative energy and channel it instead into Deadlong, a project that deserves my full attention? It’s a dilemma.

Perhaps this blog post is a load of old wank. I don’t know. It does feel good to get it out of my system, though. And I still have that itch…

Tagged  a load of old wank.
Bookmark the permalink.