Humanity, eh? The things we’ve accomplished! We’ve split the atom. We’ve discovered the God Particle. We’ve determined that light has an upper speed limit, and we’ve learnt that actually, no, it doesn’t. We’ve cured diseases, we’ve put a flag on the moon, and we’ve built computers capable of solving some of the most complex equations known to man.

But all of this pales in comparison the innovation that the 21st century will most likely be remembered for – tee-shirts.

Over the last two decades, the time from an idea being formed in someone’s head to the ability to get that idea onto a tee-shirt people can buy and wear has slowly narrowed, to the point now where someone can make a joke in the morning, and by the afternoon you can buy a tee-shirt based on that very same joke in your local shopping mall. 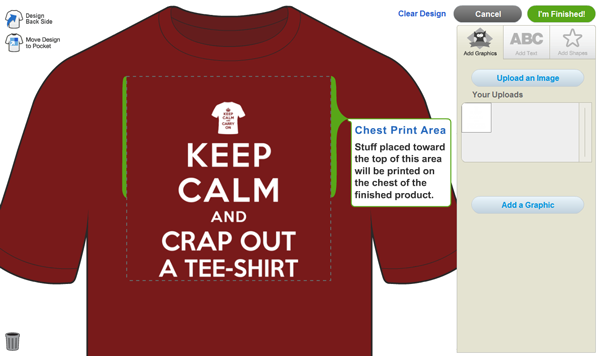 Historians of the future will refer to the current era as the Tee-Shirt Age.

And if you can’t? Well, you can make your own. This has revolutionized the way we think about the silkscreened bullshit we emblazon across our torso. We’re no longer confined to the designs offered to us by the likes of Target, Blue Navy or Hot Topic. There is a world of infinite possibilities out there. All we have to do is imagine it, pay $30 plus tax and shipping, then wait anywhere between two-to-five weeks depending on the print-on-demand store we’ve elected to use, then we can wear our dream shirt. The only one of its kind. With a single purchase we become the envy of all humanity, probably.

I don’t want to succumb to hyperbole or anything, but that effectively makes us as Gods among men.